Right out of the gate, the big news for Red Paddle 2016 is the construction of the boards has taken another leap forward in advanced technologies and processes. Decreasing weight yet increasing stiffness, sounds like the stuff of dreams? Well, Red Paddle Co have a new construction process that does away with many of the human elements (read, errors) and now fuse the layers together with a sealing and bonding agent. This does away with gallons of glue and it also creates a “one-piece” construction further enhancing stiffness overall. 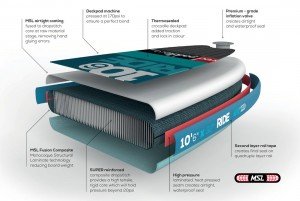 This innovative new technology involves fusing a second layer of polymer to the drop-stitch material in the raw material stage, reducing human errors. The end result is a higher-quality, high-pressure material utilizing less glue; this reduces the weight of each board while increasing the tension and making the boards slightly more rigid. The 2016 Red Paddle inflatable boards now weigh up to 5 lbs less.

Let’s take a deeper look into the 2016 range. Four new models are introduced and one 2015 model has been discontinued but replaced by an even better board! The new boards:

The 8’10 Whip replaces the 9’2″ Surf Star and has already proven itself taking the top honours at the recent European SUP Surfing Championships.

From there we have what I believe is going to easily be one of the most popular models this year, the 11′ Sport now has a big brother in the brand new 12’6″ Sport. When the 12’6″ Race slimmed down for 2015, it left a gap for the intermediate paddler looking for a fast cruising SUP but was often to heavy for the 11′ Sport and needed more stability than the Race could offer. The 12’6″ Sport is going to be the perfect board for many.

Then we have another exciting addition to the range for all the adventurous types out there, the 13’2″ Explorer+ is sure to be another popular board. It features RSS Battens, a narrower and faster outline than the 12’6″ Explorer but includes a larger forward cargo area and a large rear cargo area as well as a squared off tail for extra stability. Fancy doing an overnighter and want to cruise fast, this is your board!

The 9’4″ Snapper and the Ride family of boards, the 9’8″, 10’6″ and 10’8″ all feature small tweaks and mostly evolutionary changes besides the new MSL construction. Along with the 10’8″ WindSUP and the 11′ Sport which also only received minor updates as well as the MSL construction. The 2016 10’8″ Activ is now thicker at 5.9″ for an even better fitness/yoga/pilates platform and features updated graphics.

The 12’6″ Explorer has slightly new graphics along with the improved handles, integrated tail handle and leash attachment point and MSL construction.

10’6″ Max Race, 12’6″ Race, 12’6″ Elite and 14′ Elite boards all feature graphics updates, new handles and MSL construction. The Race and Elite boards now also feature an in-board leash attachment point to keep the darn leash from dragging and slowing you down. It all adds up!

Other than the MSL construction, some of the new things to look out for on each of the 2016 models are:

Like in 2015, all boards longer than 9’6″ came with the revolutionary Titan Pump. Pump your board to 20PSI in half the time with half the effort. The low volume 8’10” Whip and the 9’4″ Snapper come with the HP Ezee Pump.

Let’s have a look at the complete Red Paddle Co 2016 Product Guide:

We have several 2016 models in transit to us due in late November 2015. More boards from the range will follow after that so stay tuned and happy paddling!

Note: some links to products will still feature the 2015 model. These will update automatically as the 2016 models are listed.

Just received my board, very timely shipping, appreciate it.

Don't try this at home kids. These Aussie blokes are next level with...