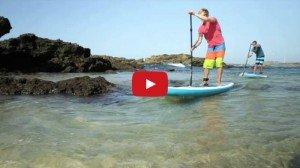 We have already taken a look at the 2015 Red Paddle Co range where we can see some new models added to a stable of favourites and world renowned boards. Since then I’ve had the pleasure to open and inspect all but 2 of the 2015 range and I can tell you that Red Paddle Co have really stepped it up a notch for 2015. So many of the boards really look the business and are leaps and bounds ahead of other inflatable SUPs on the market. And when it comes to the bag, the 2015 Red Paddle Co inflatable SUP wheeled bag (with backpack straps too) is in a league of it’s own, far and away the best bag on the market. Now put these two together and you have the ultimate complete product.

This is the official product launch video for the 2015 Red Paddle Co inflatable stand up paddle board range. Shot in Portugal, where it seems the sun never ceases to shine.

As I pumped all the boards, well, a few of them since I had a trusty assistant, I was astounded to see how they improved on an already excellent 2014 product. But they have, the 2015 boards look like a normal hard board, and with the tweaks I have seen, they’ll ride like them too!

Aside from the updated bag, graphics and color scheme, some of the new features include: factory fitted bungee cord on the forward tie downs where available, tweaked outlines and rocker lines for even better performance and for the racing models, a new more forward RSS batten position to ensure the battens work at the maximum efficiency in providing the most rigid possible board for races. Did I mention the Red Paddle Co Elites finished 1st inflatable SUP at the recent Battle of the Paddle, only the biggest race of the year! Oh, and the race models all get a fibreglass racing inspired fin! I mean how awesome are these boards?!

Pumping up an inflatable SUP by Red Paddle Co

Overall, quick delivery and product as described. I am happy with the product.

A day early I might add … PERFECT! Thank you sooooooo much for the best service ever Julian! Really appreciate it!!!

I’m very impressed with the board’s quality and the fast shipping time.

Thank you for the advice. It worked great.

Paddling the waterways of Lokeren to Ghent, Belgium

Robin shot this little video of a Red Paddle Co stand up paddle...