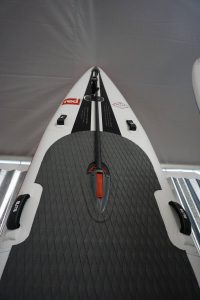 In this article we get a sneak peak at one of the new features, a patented new technology called Forward Flex Control or FFC. This feature is to give the board extra rigidity to cope with the intense pressures of competition. It is primarily a stiffening rod that works in combination with the RSS battens to deliver a more rigid ride. The 2 part carbon rod is inserted before fully inflating the board completely by clipping it into the mounting base on the nose and locking it into the standing area EVA deck base with the red lever that puts it under load. The rod then stabilises and therefore stiffens the forward section of the board and eliminates almost all the flex in the nose.

The FFC system will be exclusive to Red Paddle Co, naturally, and only on their 12’6″ and 14′ Elite model boards. By eliminating flex in the forward half of the board, Red Paddle Co has given the boards, which are already competitive against hard boards, another feature that ensures they will be even more competitive and the fastest inflatable racing SUPs on the market.

What else can we expect from the inflatable SUP market leaders? Well, we’ll just have to sit tight for a little while before we get our next little detail and feature that we can share with you. In the meantime, enjoy these little teasers from the show. 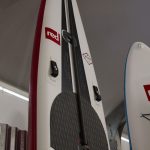 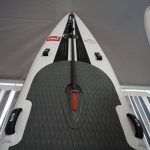 All 2017 Red Paddle Co inflatable SUPs are now on sale!

Everything was all good.

Thanks Julian! I appreciate it. Can’t wait to get it!