In this article we will provide a quick review of the 2015 Red Paddle Co 14′ Elite inflatable SUP. This board is a next level speed demon. Faster than anything out there, for intermediate/advanced paddlers and hard core racers. It is the most high performance 14’0″ inflatable racing SUP board in the world, it leads the way in stiffness, shape, consistency and speed.

The bag: For 2014, Red Paddle Co introduced wheels on the bag. For 2015, they’ve gone a step further refining the wheeled bag to be even more sturdy, durable and comfortable. Once again, the back pack straps can be hidden in the “Sherpa Carry System” making wheeled travel more pleasurable and keeping the straps out of the airport conveyor belts. This hiding area for the straps is also the pocket where you’ll find the fin on boards that come with the US Box.

The pump: The 2015 14′ Elite, as did the 2014 14′ Elite, ships with the Red Paddle Co Ezee pump which makes inflation to 20PSI quick and easy. You also get a standard repair kit in the package and a bonus cell phone case which includes the inflation/deflation and care manual.

The inflation process is very straight forward and pumping with the Ezee pump is very easy. Be sure you have the valve in the inflation position so all that pumping doesn’t go to waste when you’re ready to remove the pump hose and put on the valve cap. Read our guide about valve position and board inflation, and watch us inflate a board here. 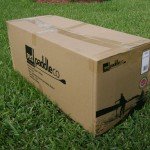 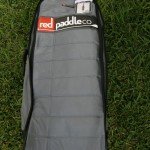 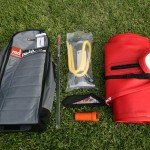 The board: 14′ long, 26″ wide and 5.90″ thick. Much like the 2015 12’6″ Elite, the most noticeable change for 2015 14′ Elite is the new position for the RSS battens. They’ve been moved further forward to improve their efficiency and keep the board stiffer. Red Paddle Co found that racers tended to stand further forward warranting a shift forward for the battens as they are designed to counter the effects of the paddler’s standing position and weight, the point around which inflatables can flex. RSS battens improve stiffness by up to 50% and the new position further enhances their efficacy. That said, it is hard to notice any flex at all when paddling a Red Paddle Co board. Outline has been streamlined a little for a pointier nose and tail, and the wide point has been shifted forward to again match the preferred standing position of most racers.

The fin has been upgraded to a specialised fibreglass race/weed fin for higher performance and less drag. See our guide on how to install a US Box style fin in your SUP. Also new for 2015 is a nose runner fin on top of the nose. This aids in shedding water off the nose in heavy chop or down winding, and prevents nose diving.

Built using Red Paddle Co’s Tec Air construction process, it features high density drop stitch technology, double layering “board within a board” technique and quadruple layered rails. The weakest part of an inflatable paddle board is the rail (sides) where the top and bottom layers are joined, due to the lack of internal support from the high density drop stitch. Most inflatable stand up boards are constructed with just one rail layer on the rails, whereas Red Paddle Co use 4. Find out more about Red Paddle Co’s Tec Air construction.

Updated graphics and board colors give it a hard board look to match it’s hard board performance.

It’s an evolution of a very successful racing SUP board, but you’ll notice for this year the RSS batten pockets and widest point have been moved forward to match a racer’s standing position for better speed, balance and overall performance, improved graphics, better instructions and safety tips around the valve and 2 tone colour scheme.

Let’s take a little walk around the board and see how the real thing looks.

On the water: Put simply, the 14′ Elite is the highest performing inflatable 14′ racing SUP available. The narrow 26″ width means this board is for the intermediate and advanced paddler with a definite race or down winding focus. This is not really a board to leisurely paddle or tour on unless you are smaller, say under 180lbs. It is geared for racing and does not come with cargo areas, only the absolute necessary deck area, and new for 2015, forward carry handles for your beach starts.

Now for some detailed images of the 2015 14′ Red Air Elite, click to enlarge. 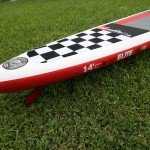 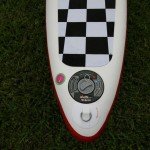 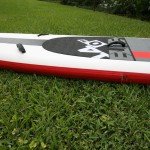 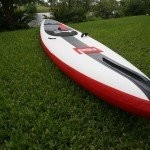 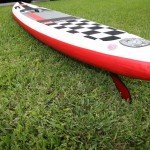 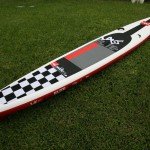 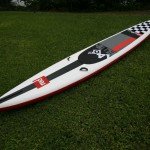 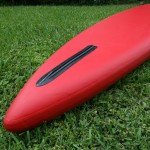 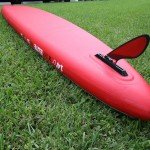 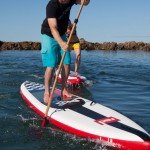 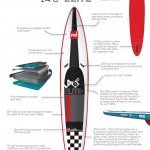 The 2015 14′ Elite is the highest performing inflatable in the 14′ raceboard class with a proven record. Away races are now a distinct reality as the 14′ Elite is an inflatable board which makes travel, storage and general handling of the board so much easier. Combine it with a 3 piece SUP paddle, you’ve got the ultimate package for all conditions.

Awesome… Perfect, thanks for all the help!

Thank you very much. It was a pleasure doing business with you.

I’m grateful for all your help… You’ve been awesome. So informative and PATIENT! I can’t thank you enough.

Thanks again for the help and advice. You’ve done a great job with your blog and videos.

Stand up paddle board basics – Using Your Core