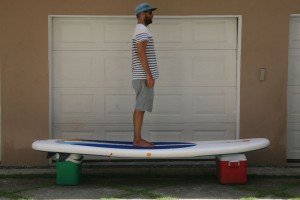 Is it stiff enough? It’s a common question in regards to inflatable stand up paddle boards. Stiffness or rigidity directly effects performance and is justifiably a concern when looking at inflatable SUPs. Well, at Red Paddle Co, they have patented technology that improves the board’s stiffness. However this technology is not the only factor when it comes to inflatable paddle board stiffness. Pressure and thickness also play a role.

In this article we hope to illustrate how pressure effects stiffness and how Red Paddle Co’s clever technology improves stiffness. RSS battens slide into sleeves along the board’s rails to counter the effect of the paddler’s weight, the point around which boards flex. Read more about the RSS battens here.

Now, whoever says that anything less than 15PSI is suitable for an inflatable stand up paddle board is having a laugh. Allow me to illustrate. I will be illustrating this by measuring sag. How much of it specifically, at varying pressures, with and without RSS battens. Sag is not a perfect measurement of board stiffness but the best way we can quantify the feeling of flex while paddling. To the GIFs!

The shots above feature me at 190lbs, on a Red Paddle Co 10′ Surfer on 2 coolers, 6ft apart. The following chart breaks down what you see above into exact numbers. The little orange tab you see near my feet was a Post-It with a black line on it to provide an exact measuring point for each control measurement (control) and sag measurement (paddler) for each pressure without and with the RSS battens. A control measurement is to ensure I’m comparing apples with apples. If the board moves between the tests and I just go on to measure the sag, I’m not getting a true measurement of the sag at each PSI. Did I geek out for this test or what?!

The changes in the control were due to the board shifting a little while I was pumping it up to the next pressure. I don’t think the minor measurement differences relate to the pressure differences.

So, as you can see, the biggest difference happens between 10PSI and 15PSI. Then incremental steps from 15PSI to 20PSI to 25PSI. I am using these measurements and equate less sag to more stiffness. A summary of the increase in stiffness:

And now we get to compare the stiffness of the board with the RSS battens for the same pressures.

Again, changes in the control are due to the board shifting while I was pumping, I don’t think the are related to pressure differences at these PSI’s.

Overall, we can see that with RSS battens, the board has less sag, which is what I am equating to more stiffness. A summary of the increase in stiffness with RSS over the varying pressures:

And now a summary of the % increase in stiffness thanks to the RSS battens:

Now, if we were to compare a Red Paddle Co inflatable SUP with RSS battens installed and pumped up to 20PSI, my chosen standard pressure for when I paddle and well within the 15-25PSI recommended range, to a standard board from another manufacturer with a recommended pressure of 15PSI and obviously no RSS battens, we’d get the Red Paddle Co as a 46% stiffer board. I’ve just taken the non RSS 15PSI and compared it to the 20PSI with RSS but the actual construction of a Red is going to give it a stiffness advantage over other brands too. Something I hope to be able to measure in the coming months. (This is comparing boards at, as near as makes no difference, 4″ thick.)

Stiffness is not just a function of the thickness of the board, or the construction, or the pressure, or the technology used, it’s a combination or perhaps even a compromise to get the most stiffness with the least weight, best feel and best price. Some brands out there will insist an 8 inch thick board will only need 10PSI to be stiff, which might be true, but you’ll be bobbing around like a cork in the water and the board just won’t feel right. Red Paddle Co uses multi layer construction and the RSS technology to be as stiff as possible, keep construction weight down and board thickness to a minimum to enhance the feel and performance of the boards.

And finally, each level in detail. 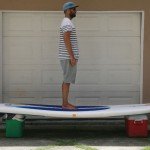 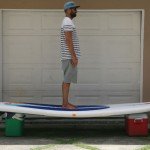 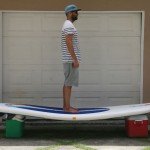 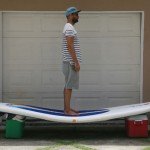 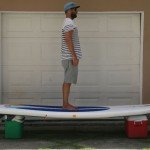 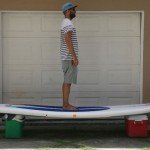 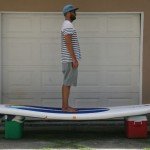 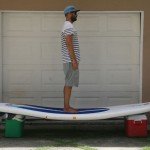 You were spot on about my board – smaller, easier and for a beginner – gnarlier! And thanks for the help! You’re great.

Awesome… Perfect, thanks for all the help!

Thanks for the good info here.

For 2017 and onwards, all Starboard inflatable stand up paddle boards (except the...