Share:  Facebook Twitter Pin It Email
In this article we review the 2014 Red Paddle Co 12’6″ Race inflatable SUP. Red Paddle Co‘s answer to the popular amateur/intermediate race market, downwinding and the general distance cruising crowd. But, with one crucial advantage over other hard race boards, the ability to travel to events or for pleasure, without any oversize baggage headaches, roof racks, dings or scrapes.

A flat rocker for amazing glide and speed. A nose runner fin and large removable single fin at the tail for awesome tracking. Small deck area for weight savings. Industry leading 25PSI and RSS batten technology for the stiffest, most rigid and fastest board possible. Well, that’s the marketing speak over, let’s see how the board really goes.

We tested it over 2 extended sessions in the ocean. One rather choppy day with a few knots of breeze and small 1-2ft waves on the reef. The second session was glassy mirror flat with no breeze at all. We have several pictures of the board, bag and accessories, as well as a walk around video. For reference, I’m about 6ft and 190lbs.

Contents of the bag are much the same as 10′ Surfer and 10’6″ Ride we reviewed last year. This includes the board, RSS battens, an Ezee pump, repair kit (dry case) and US box style removable fin. For 2014 you also get a free waterproof cell phone case and neck strap. Different from 2013 is the bag itself, upgraded materials, zip and now with wheels! A little heavier but a great addition for travelling with the board. 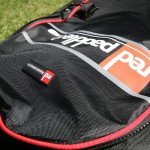 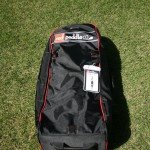 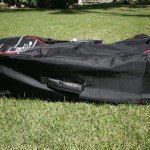 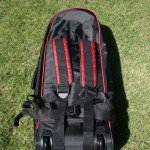 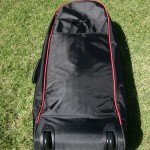 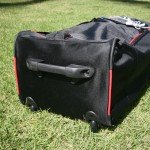 Other updates to the bag include the ability to hide the backpack straps. The waist strap has been downgraded slightly and is now without padding but the addition of wheels more than make up for this difference. It’s still very comfortable to carry on your back despite the changed waist strap. Gone is the front zippered pouch but you now have connection points for an optional smaller backpack to buckle onto the front of the bag. 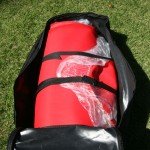 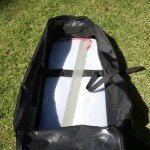 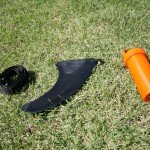 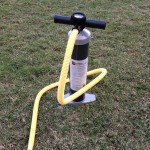 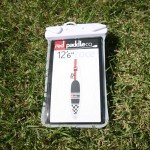 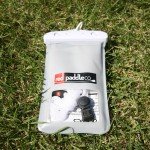 Now that the board is out of the bag, let’s get into some figures. 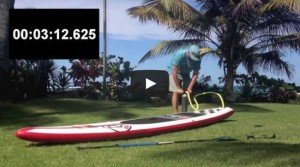 Inflation of the 12’6″ Race is very straight forward. Before one of my sessions I created this 12’6″ Race inflation video so you can see the whole process. You pump for a few minutes to get some shape, install the RSS battens, pump for a few more minutes, install the fin, then top off the board to final pressure. See the inflation video in 8x speed for the complete process. It took me 7 minutes 10 seconds, which includes about 1 minute installing the RSS battens and about 1 minute installing the fin. If you want to know more about the RSS battens and board construction check out these articles: RSS Battens and Tec Air construction.

Actual pumping time with the Ezee pump is about 5 minutes 10 seconds. This board is thicker and longer than both the 10′ Surfer and 10’6″ Ride so the time is line with the extra air you need to pump into it for the ideal pressure of 20PSI. With the optional Red Paddle Co HP pump, you can pump to 25PSI for increased pressure and rigidity. With the standard Ezee pump, 20PSI is enough and the board feels rock hard. I stood on it (without the fin installed) and it felt like a hard board.

So, let’s take a walk around the board now that it is inflated.

Like I mentioned earlier, for this review, I did 2 extended sessions on the ocean. A choppy session and a glassy flat session. The only real change to the board for 2014 is the EVA deck texture, the shape is the same. I’m partial to the bumpy/grooved grip of the 2013 boards but the flat EVA deck of 2014 is just as comfy and grippy. As always the inflatable board provides a very comfortable platform for standing on, no sleepy feet here.

In the chop, the board handled quite well. No noticeable flex and was very stable. The breeze was nudging the nose around so once I found the ideal standing position, a balance between keeping the nose down for tracking but not plowing into every wave, it just up and went like a rocket. My feet were in line with the carry handle.

The next session on glassy flat water was a real eye opener. It’s been a while since I’ve ridden a board this fast. Holy cow, this thing flies. I adjusted my footing forward a little for the mirror ocean surface. This kept the nose just kissing the surface while eliminating all tail drag. The glide was exceptional and the tracking from the nose runner fin and large tail fin was keeping the board straight and true for upwards of double my normal paddle strokes per side. It plain and simple hauls ass!

I touched on this in earlier reviews regarding inflatable SUP thickness and the resultant roundish rail shape due to thickness. I find the thicker the board, the rounder the rails. On occasion I find that rounder rails have a more vague feeling in rougher conditions but that also creates a huge forgiving zone for board stability. The Red Paddle Co 12’6″ Race is no exception that while the board is thick for rigidity with rounder rails, it is surprisingly forgiving and stable. Like a numpty though, I fell off once, but only due to the exceptional tracking of the board. I was expecting it to go one way but it tracked so straight and was so stable, I overcompensated for the chop and fell off! 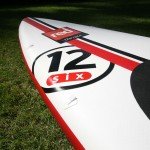 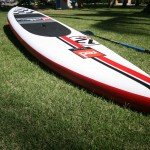 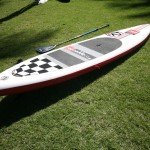 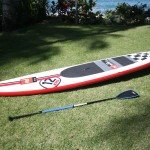 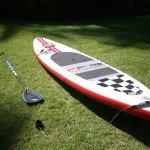 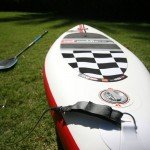 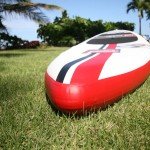 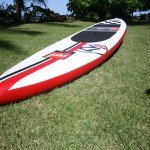 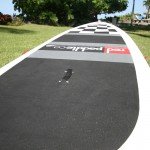 I’m a SUP surfer at heart but enjoy all types of paddling. I sailed and kiteboarded competitively on the state, national and international levels for many years so my desire to compete in racing is not high, however, with my competition experience I can understand the passion for racing. But, this board has speed in spades and even a non racer like me is now checking the calendar for (fun) races to compete in. I’m going to be taken away from my local break for a couple of months later this year and stuck where getting to the surf is a big mission. This board just moved to the top of my list for what I’ll be paddling while surf-less and now, racing.

When I was on the flat water, the board really hustled along and being an inflatable, it’s almost a no brainer for many who wish to travel to races. Throw in a 3 piece paddle and you can check your bag the whole way and be stress free. Airline damage? BOP racing damage? Not anymore!

Let’s be honest, this is a semi-pro racing and cruising board, not a surfing board. That said, I thought it was only fair to try it out in the waves. One day your race might include a break and you’ll want to know what’s up. The day in question featured waves about 1-2ft high and the board rode them ok. They were nothing more than little rollers but the board surfed well and once you got your weight back, would turn ok and did not pearl. Carving out a “bottom turn” or “hitting the lip” is not in this board’s vocabulary but it’ll ride the wave, track well and put you into first place if you aren’t already. 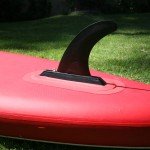 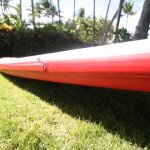 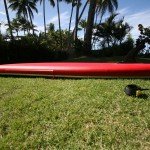 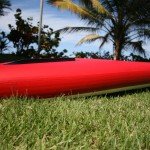 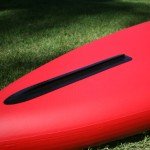 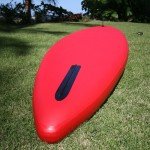 Piece of cake. Pop the valve cap, twist the internal valve locker and WHOOSH! As the board deflates, slide out the RSS battens and remove the fin. Don’t forget to replace the screw and tab back into the fin for safe keeping. Folding the 12’6″ Race is a little different in that you fold/roll around the nose fin. So you fold over about 1.5ft of board, fold the nose back and then proceed to fold/roll around the nose fin section. Push the air out as you go and don’t forget to close the internal valve ready for inflation next session and replace the cap to keep moisture and dirt out.

A not-often-mentioned section of most SUP reviews but in this day and age of eco-cars and carbon footprints, a board you can roll up, put in the trunk and store in the closet is something that has to be considered. Especially when the performance is right up there and ease of travelling to events is considered.

With the added thickness over the 10’6″ Ride and 10′ Surfer, plus the RSS battens, it really shows how well this 12’6″ Race inflatable board can perform. The board really moves along, glides and tracks superbly. Inflatables can take a lot of punishment and abuse and I’m not sure I’d be willing to shell out several thousand dollars for a fragile carbon race board that might weigh a few pounds less but if I look at it wrong, it’ll crumble. I’m careful with my gear, probably more than most, but once the first scratch or ding happens I’m a little less careful. This board might not be the fastest out there but it is the perfect racing and cruising board for most.

I think maybe I’m secretly looking forward to my surf-less stint later this year. Is this board really that good?

Pumping up an inflatable SUP by Red Paddle Co

Thanks so much for the quick delivery!

You were spot on about my board – smaller, easier and for a beginner – gnarlier! And thanks for the help! You’re great.

Need some inspiration on what to practice next time you are out on...