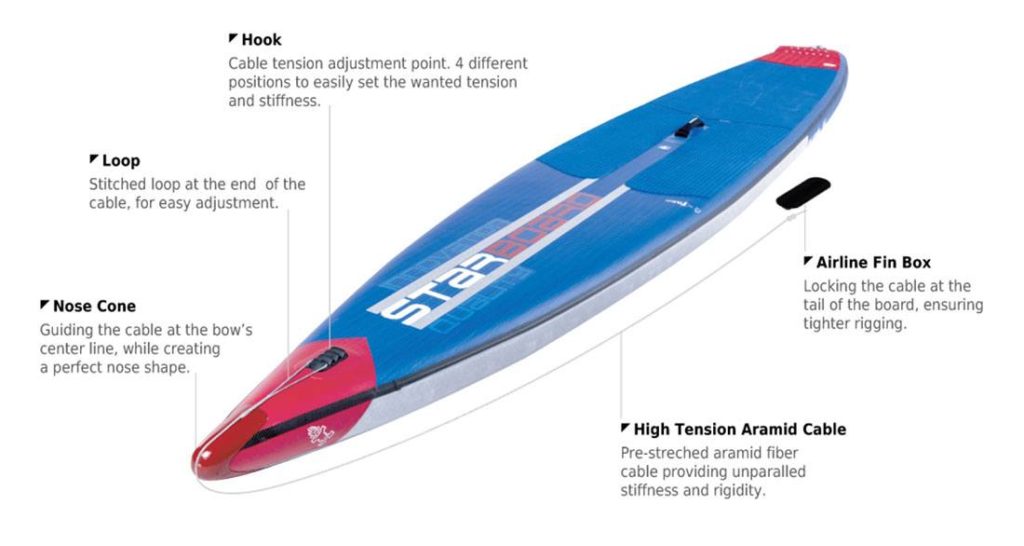 The free-flowing aramid cable locks the board in shape when inflated, creating a solid trustworthy hull sensation.

If you already have the Airline knot set, continue to this video about setting up your board.

The patented Airline Technology utilizes a pre-set free-floating cable. It is attached to the nose, goes under the bottom and ends at the fin box. The preset cable is slightly shorter than the board so when the board inflates, the cable comes under tension and stiffens the board significantly. We measured 1.8 cm less hull deflection in testing and 2016 World Champion Connor Baxter swears by it.

How to set up the Airline cable

Currently, Starboard is using the Airline technology for their top of the line racing inflatable SUPs, the All Stars. We have these 3 in stock, if you don’t see the one you want, call us on 1-888-252-4983. See the rest of the Starboard inflatable SUP range here.

Packing up your Titan equipped inflatable paddle board

What do you get with a Starboard All Star Airline inflatable paddle board?

Thanks so much for the quick delivery!

I’m grateful for all your help… You’ve been awesome. So informative and PATIENT! I can’t thank you enough.

Overall, quick delivery and product as described. I am happy with the product.

Thanks Julian. One of the things that got me interested in an ISUP was your review…

Fanatic’s video guide to inflatable stand up paddle board basics

We've recently started selling Fanatic inflatable SUPs, but Fanatic has been around for...