Double Chamber technology is technically not new for 2018, but it is new to the wider range of Starboard inflatable paddle boards. First featured on their Ocean Rescue board, Double Chamber now features on most of the Deluxe models. We take a closer look at the Double Chamber system and what it offers.

First off, we did a side by side stiffness comparison of 2 very similar Starboard Deluxe boards. However, one was a 2017 Deluxe and the other was a 2018 Deluxe. Crucially, the 2018 Deluxe was equipped with the Double Chamber system, exclusive to Starboard inflatable paddle boards. Their marketing materials bill it as Safety First and Ultra Stiff. We can’t deny the safety aspects of the Double Chamber system. It has been and still is an underlying concern for some paddlers regarding the security of paddling an inflatable board. Whether it is out in the ocean some distance from shore, or it’s just being a long way from home, having a board that you can trust is important, but having a board that has a built in safety floatation system is enough to put their minds at ease. While we’ve never experienced or even heard of catastrophic board failure while in use, when your life is on the line, you like to be secure in knowing your gear has backup systems. 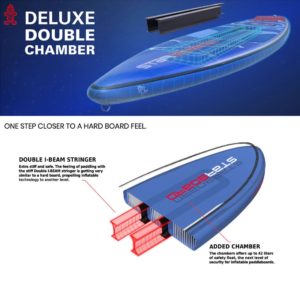 Anyway, the obvious safety benefits out of the way, we decided to test the stiffness claim. Theory and diagrams are great but seeing with our own eyes and measuring the difference provides definitive proof. So, we grabbed our 2017 Atlas Deluxe 12’ x 33” x 6”, pumped it to 18PSI and placed it on 2 sun loungers 6ft apart. The loungers were on level ground, the pool deck to be exact, and we measured the distance from the seam to the ground in the middle of the span. Then I, a spritely 195lbs, stood in the middle, and we measured the sag. We then repeated this for the 2018 Touring Deluxe 12’6” x 31” x 6” board, also pumped to 18PSI. While I understand the boards are not identical, they are pretty close in specifications and most importantly are the same thickness. THe 6″ length difference doesn’t really matter and width would have a minimal effect on sag as measured. Besides, it’s all we had available!

Some differences between 2017 and 2018 Deluxe constructions. The 2018 version does not feature the 3K carbon rail bands which would in theory make the 2018 board more prone to sag. The Double Chamber systems adds about 2lbs to the board’s overall weight. This weight is also in the middle of the gap we have the board on, so it is adding to the weight on the gap. Both of these are working against the board’s stiffness in this test, yet the Double Chamber board sags 50% less proving that the I-Beam design and configuration of materials really does work.

Sag, what does sag have to do with stiffness? Well, a board that sags less under the exact same circumstances can be called a stiffer board, in that it holds it’s shape better. But you don’t paddle a board on sun loungers 6ft apart. True, but the sun lounger gap test translates to the pressures experienced by a board in the water being pushed and moved by chop and the paddler. The stiffer Double Chamber design holds the board’s intended shape better and therefore provides a stiffer, more stable, more predictable ride, in a wider variety of conditions. A 100lbs paddler on a glassy flat lake isn’t going to put a board under pressure, but a board with a 200lbs paddler in choppy conditions, is going to put the board under all sorts of stresses and forces in all directions. So, a board that holds its shape better, is going to ride better.

On the water, you can definitely feel the difference. In my case with the longer Touring board, it pierces chop rather than flexing over it. When I put the hammer down for a sprint, the board doesn’t flex and bog down under my extra paddling effort.

Keep in mind, and as shown by SUPboarder in a recent video, full carbon boards sag and flex also. Keeping them light means using the minimum amount of carbon and glass, which means they flex under load too. You may not be able to snap a tree at it’s trunk but you can break one of the smaller branches. It’s all about finding a balance between materials, strength, flex and weight.

Check out all the boards we stock with the Starboard Double Chamber system, and contact us with any questions.

How to inflate your 2018 Starboard Deluxe Double Chamber board

Everything was all good.

Thanks again for the quick shipping and good service!

Thanks for your incredible customer service. You guys have been a pleasure to deal with.

We absolutely love our Red Paddle Co 12’6″ Explorer paddle board.

Starboard injected 25 years of board building innovation into their 2019 inflatable board...